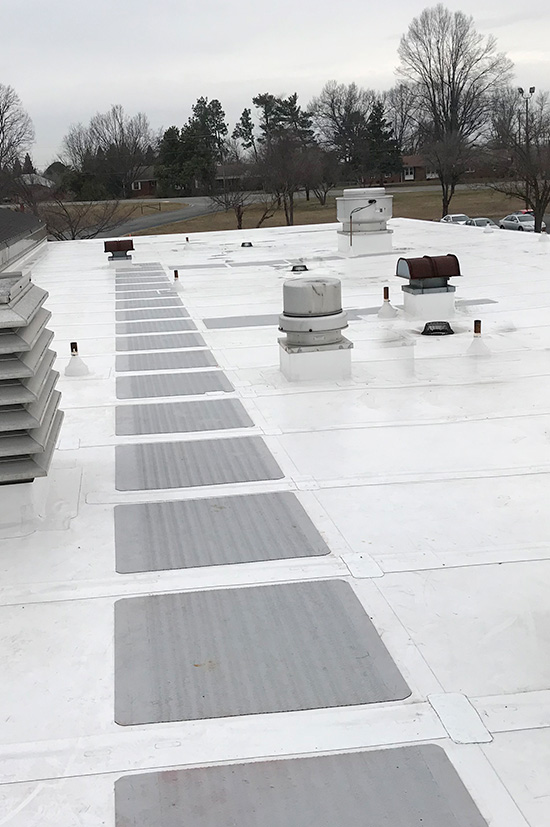 The initial design was based on the original construction documents and called for a replacement of the top course of CMU blocking. However, the construction phase revealed that the substrate was not adequate to secure the new blocking. Our design team worked with the contractor to identify an effective solution without costly change orders. The final solution involved Raymond determining which perimeter blocking areas could be corrected by tuckpointing the mortar joint versus areas that required a reset with new mortar. This allowed for much of the existing blocking to remain in place.

The project was originally scheduled as a summer construction project due to the break in the academic school year; however, the existing perimeter conditions did require additional time to be addressed to design specifications. Our team worked with the contractor to ensure that the safety plan properly accounted for all public areas and walkways so as to minimize overall disruption to the school operations. Additionally, all construction was coordinated with the owner to ensure proper communication of safety parameters. All re-roofing work was completed before the school year began.

During our construction inspections, our team discovered that the cover board fastening was inadequate for wind uplift requirements. The team worked with the manufacturer to determine the optimal pattern and process for adding more mechanical fasteners.

Our initial site survey revealed that the existing insulation was an extruded polystyrene that could be reused during the project. This allowed the design to present multiple cost-effective options, and eventually enabled the owner to replace double the roof area as had been originally budgeted (i.e., the entire roof area).

Additionally, construction bid prices were lower than original cost estimates. This allowed the Raymond team to recommend a gypsum cover board and PVC roof membrane system, which is of higher performance and quality than the original TPO design alternative.